Home » Recipes » Kitchen Tips » Thai Ingredients 101 » What is Oyster Sauce And Which is the Best One? 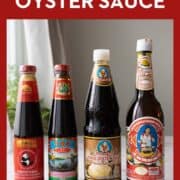 If you love cooking Asian food, oyster sauce is probably already in your kitchen. But do you know if the one you have is a "good one”?  And is the expensive oyster sauce you bought (or didn't buy) worth the splurge?

This post will discuss everything you need to know about oyster sauce, including what it is, how to use it, and which brand is the best after tasting them straight up and in a stir fry! To see the oyster sauce taste test in action, complete with my reaction and full analysis, be sure to watch the video!

What is oyster sauce and what does it taste like?

Oyster sauce is a predominantly salty seasoning that is most commonly used in stir fries, but is also used in stews, soups, marinades, and even straight up as a drizzle over steamed vegetables. Thick, rich, salty, umami and slightly sweet are the characteristics of oyster sauce, and it won’t necessarily make you go, “wow, oysters!”

In Thai cuisine, it’s a member of what I call "the trinity of Thai sauces.” Along with soy sauce and fish sauce, it’s a staple in every Thai kitchen, and many people use it daily.

Oyster sauce is of Chinese origin, but is now used in many Southeast Asian countries where their cuisines have been influenced by China. Lee Kum Sheung, the founder of the popular oyster sauce brand Lee Kum Kee, is said to have accidentally invented oyster sauce in 1888.

The story goes that Lee Kum Sheung forgot about a simmering pot of oyster soup, and when he came back to it, it had reduced into a thick, rich, brown liquid. He discovered that this liquid was flavourful and tasty, and that was the beginning of oyster sauce. A note: this story is told by Lee Kum Kee themselves in this video.

How is oyster sauce made?

If you had to guess how oyster sauce was made, you might have reasonably thought that there are pureed oysters in it, which is why it’s thick. Nope.

Surprisingly there are no actual oysters in oyster sauce at all, but there are “oyster extracts.” Oyster extract is basically oyster cooking liquid, as per the origin story. Shucked oysters are boiled in big vats, then the oysters are removed, and the remaining briny, flavourful liquid is the base of oyster sauce.

The oyster extract may get further reduced, then starch is usually added to thicken, and other seasonings are added such as salt, sugar, soy sauce, MSG and colouring. Brands vary significantly in what seasonings they choose to add, and in my video taste test I was so surprised at how different they taste; especially when comparing the Thai and Chinese versions!

Oyster Sauce Taste Test: Which brand is best, and does it really make a difference?

I bought 4 brands of oyster sauce that I can find here in Vancouver and pitted them against each other. So here they are - and watch the video below to find out how they perform when tasted straight up, and whether the difference is really that obvious once used in a stir fry!

This video shows you my live side by side taste test, both straight up and also in a Chinese broccoli stir fry. Note that even though I've used these before (except Healthy Boy) this is the first time I'm tasting them side by side, so my reaction is real!

In case you don’t have time to watch the video quite yet, here’s a quick recap of my ranking:

How to choose the best one based on the label

So now that you know how these 4 sauces compare, but you’re at the store, and there are brands I didn’t cover here…what do you do? Well, as I shared in the video, thankfully we can still make an educated choice based on a few factors.

The ingredient list is always good to look at, and if things like MSG and added colour bother you, then you definitely want to check it out. BUT...previously I maintained that if oyster extract is listed as the first ingredient, then there must be more of it, and therefore it must taste better than a brand that has it further down the list. Makes sense, right?

Well, this proved to be not so straight forward. Here's why:

This doesn't match our taste test or the protein content in any way, EXCEPT the two LKK brands differ as expected. I'm certain that this is because the way LKK defines “oyster extract” is the same between their 2 product lines, but other brands define it differently. How concentrated and diluted is this oyster extract? We don't know. And what does "oysters" even mean in the case of Healthy Boy? We also don't know. Not to mention the cooking process and the quality of oysters...there are just too many unknowns.

So I apologize to everyone in the past whom I advised going entirely by the ingredient list!

Most of the time, no. Wheat flour is sometimes added as a thickener as is the case with both LKK brands, and some brands, such as Maekrua, contain soy sauce which isn't gluten free. But Panda brand does have a gluten free oyster sauce that I have seen in some stores, and Megachef (the Thai brand I couldn't find) is gluten free.

Can I use Chinese oyster sauce in Thai food?

Yes. While the flavours of Thai and Chinese oyster sauces are obviously different in a taste test, once it’s in a dish it’s close enough that it’s not going to make the dish taste inauthentic. If it makes you feel better, your local Thai restaurant is most likely using Panda.

I usually buy LKK Boat Lady because of ones that are easily accessible to me, it’s the best. But whenever I make a trip to the Thai store, I will grab a bottle of Maekrua because it’s what I grew up with, and the bottle really has a nostalgic effect on me.

However, after this taste test, I was surprised how much better Boat Lady is than Maekrua…so…this changes things. I’ll likely buy Maekrua much less now - as sad as that is!

But if you have a memory of a dish that you had in Thailand and you want it to taste exactly like what you remember, then using Maekrua is probably going to get you there.

How do you cook with oyster sauce?

How to Store Oyster Sauce

This is because we use it almost daily and can go through a bottle very quickly; and with many Thai kitchens being outside, it’s just more convenient to keep all our sauces outside as well.

If you are vegan/vegetarian or allergic to shellfish, good news! There are decent substitutes on the market, such as one I used for this vegan claypot glass noodle recipe.

So if it's a vegetarian sauce that looks like oyster sauce, it's probably meant to be a substitute. Most likely, shiitake mushrooms are the source of the umami in place of the oysters.

Here are some tasty recipes that use oyster sauce!