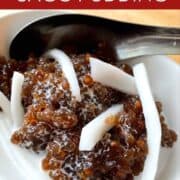 If you’ve had sago desserts before, did you know that you’ve been eating fake sago pearls all this time?? Confused? Read on, or just watch the video where I explain everything AND do a taste test comparing real vs fake sago pearls!

When Sago is NOT Sago

If you do a Google search of "sago desserts" you'll come across lots of recipes for mango and coconut sago puddings. But look into the recipes, and you'll notice that these puddings are actually made from tapioca pearls.

But if they’re made from tapioca, why are they called sago? WELL, "Breaking News" ... that is because these tapioca pearls have been used as a cheaper imitation of REAL sago pearls. And real sago pearls are made from a plant actually called sago palm.

What Happened to Real Sago?

So why did we need an imitation of sago in the first place? The problem with true sago is that they are precious. It takes sago palms at least 8-10 years to reach the right maturity, and then the harvesting and processing is super labour intensive.

This means that true sago pearls are limited in quantities and are much more expensive, so people started using tapioca pearls as a substitute, and the real stuff was forgotten for a long time. Only recently did it make a bit of a comeback thanks to social media spreading news of the original substance.

So What is the Fake Stuff Then?

The sad thing is that in Thailand we actually call tapioca pearls "sakoo," our term for sago; which as we now know is categorically wrong. But there was no other name given to it, presumably because they were originally "snuck in", pretending to be the "real thing". So now we're having to call the real one "true sago" or "tree sago," when really it should just simply be "sago."

How is Real Sago Made?

So what is so hard about making sago? Why are they so precious? In a nutshell, here's the traditional process:

Video: How sago pearls are made in Thailand

To really appreciate the process, watch the video below to see sago harvesting and processing in Southern Thailand (the video is in Thai, but it's mostly visual.) In the video some machines are involved in the process, but as you can see it's still pretty basic. If seeing this doesn't make you want to savour every bite of real sago...I don't know what will!

But how different are they, really?

This is where I will direct you to my video to find out! In the video you will see how they cook up, and also my reaction to tasting real sago for the first time. I'll then give you my verdict and whether it's worth searching for.

But here is some further analysis regarding the differences between the two that I didn't include in the video:

Real sago is made from unrefined starch and therefore has a colour; they can be anything from brown to pink. The lighter pink ones are more "desirable", presumably because they're prettier, though I don't believe they are superior in flavour.

Tapioca pearls, however, are pure white because they are made from refined tapioca starch. This has implications on flavour because the refining process removes all the flavour from the original cassava plant.

Note: You can find tapioca pearls that are pink and green; those simply have food colouring added and are not flavoured.

Tapioca pearls are made in factories, which can turn them out in perfect little spheres.

Sago pearls are turned into beads manually by rolling around little clumps of damp starch in a flat bamboo tray until those clumps turn into little balls, as shown in this video. This manual process means that the pearls have uneven shapes and sizes. This has implications on texture, as you will see in my comparison video.

I tried to eat these pearls raw (though sadly I did not do this on camera), and real sago instantly disintegrated into powder in my mouth, but the tapioca pearls were so hard they could've broken my teeth! This explains the volume difference between equal weights of the two pearls; 50g of real sago looks like a lot more than 50g of tapioca pearls.

This also explains the difference in cooking time as shown in my video; tapioca pearls took much longer to cook since the water takes longer to hydrate the denser pearls, while real sago cooked up almost instantly.

This is where words don't suffice, and you'll have to watch the video below so you can see my reaction to get the full sense of how they differ. You'll also see how to cook them.

Where to buy real sago pearls?

Now that I've convinced you that real sago pearls are worth trying ... next I have to apologize for having to tell you that, if you DO want to try them, you'll have to go to Thailand or another country that produces them.

I've looked around the internet and could not find an online source for true sago pearls. When you do a search for "sago pearls" even "real sago pearls" all that comes up are listings for tapioca pearls. Even if you see some brown ones most likely they are large tapioca pearls made for bubble tea which get their colour from food colouring and/or brown sugar.

If you do go to Thailand, don't be looking for them at the supermarket though. Because these are produced in such small volumes, you'll instead find them at places that sell locally made, artisanal products.

The future of the sago

Real sago is making a bit of a comeback in Thailand thanks to the media which has made people become more aware of their existence. I am one of those "media"; and quite frankly I'm a bit concerned that if the demand for them increases, what will this mean for the environments where the sago palms grow?

On the one hand, it would create a new source of income for people in the villages that make these pearls. In fact, this has already started to happen with the increased demand in Thailand, and it has helped raise the standard of living for some people in the poorer areas.

On the other hand, over-harvesting is always a concern. So while I wrote this post as a source of knowledge to expand our awareness of where our foods come from and how they evolve, it's equally important to be aware of the vulnerability of these sources and helping to protect them.

I can't leave you without a recipe now can I? Should you be so lucky as to get a hold of real sago pearls, there's no need to do anything fancy to them. This simple pudding lets all of their natural flavours shine. The important part is to serve it while still warm for the best texture - don't refrigerate!

I don't mean to offend our old friend the tapioca pearls here! They are great in their own right! Try them in this refreshing tapioca melon dessert, or use tapioca starch to make fun bubble tea noodles! 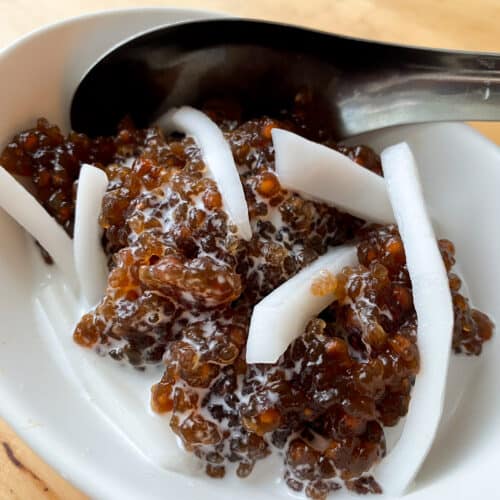