This recipe is the first of our "Ingredient Challenge"! The idea is that I will create a dish around a specific ingredient using only 5 additional ingredients (plus some freebie staples), and I will film me cooking it for the first time, unrehearsed, and I have to do it in 20 minutes!

The idea is that I want to build a repertoire of simple, quick recipes using everyday ingredients that are easy to find. I might use a harder-to-source Thai ingredient but I'll try to keep it that to no more than 1 ingredient per dish.

As you can see in the video, I went over time! To be fair, I didn't really rush and I spent a lot of time talking you through the recipe. And hey, I am 6 months pregnant in this video, with a pulled ligament in my leg, so moving quickly was just NOT gonna happen!

2. I am allowed to bring 5 additional ingredients, plus some "freebies" which are staples most people have at home. Freebies include: salt, pepper, sugar, oil, flour, ONE OF fish/soy/oyster sauce, and a neutral spiciness. And by "neutral" I just mean it's not going to add any other flavours to the dish other than heat, so this might be a Thai chilies or dried chili flakes, but no hot sauce!)

3. I must cook it within 20 minutes (which did not happen in this first one, haha!)

4. I must not have made this dish before, and I cannot practice this dish prior to filming.

5. The video will be left minimally edited so you can see the entire process. I will only speed up parts where nothing is happening, or trim off a second or two of silence here and there just to keep the pace going.

Let's see how I do with this first one!

*Extra Goodies for Patreon Members: In this episode's "Show After The Show" I share some other ways you can cook eggplant Thai style. Click here to find out more about becoming a Patreon member! 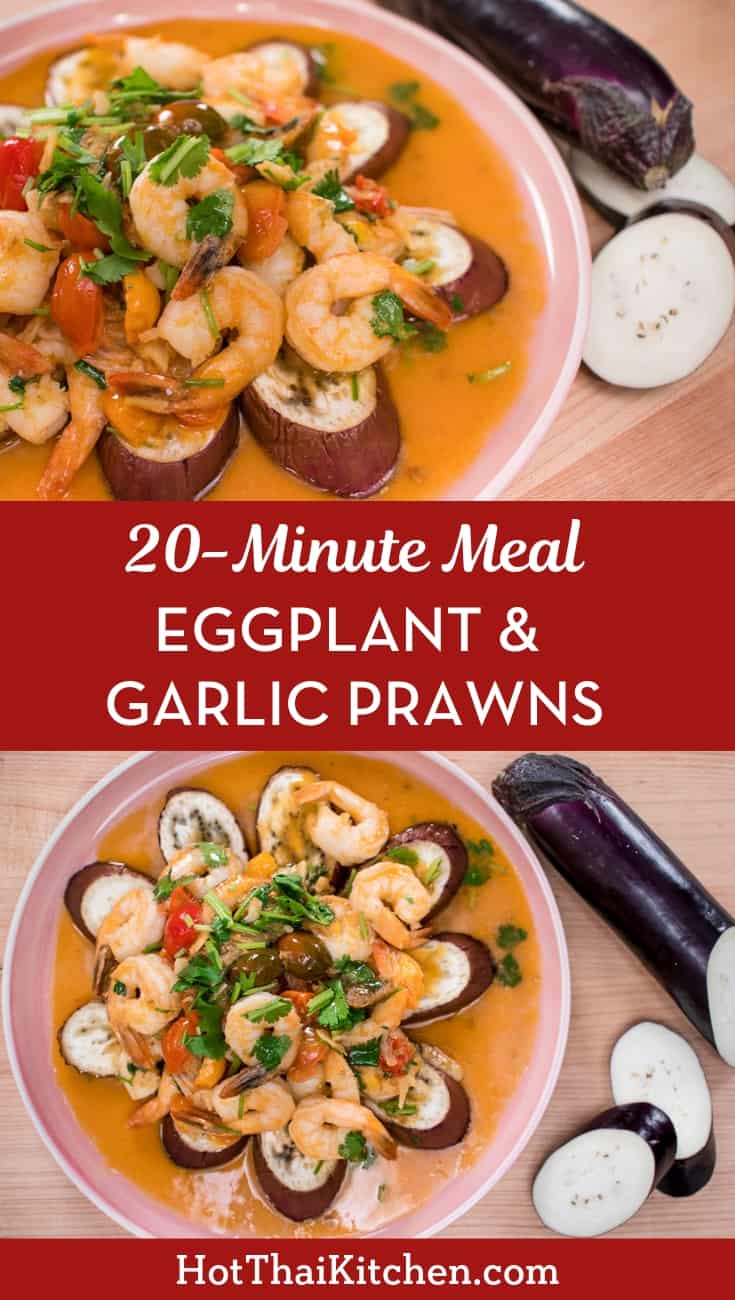 Please keep in mind that this is part of a "live" ingredient challenge, so I did not measure exactly how much of each ingredients are put in. So treat all amounts as an "estimate" and use the video as a visual guideline for how much was added!

Line a baking sheet with parchment paper and drizzle with cooking oil. Place the eggplant slices on it and brush it tops of the eggplant with more cooking oil. Sprinkle with a couple of pinches of salt and roast for about 15 mins.

Crush garlic in a mortar and pestle just until they're broken into big chunks, or  you can smash and roughly chop them.

Crush the chilies until broke and the seeds are released, but the chili is still in one piece. Alternatively, mince the chilies into small pieces.

In a wok or a large saute pan, add just enough oil to coat the bottom. Add the garlic and chilies and heat slowly over low heat until the garlic starts to turn golden around the edges.

Add shrimp paste, shrimp, fish sauce and sugar. Turn the heat up to high and toss just until the shrimp are cooked.

Add halved cherry tomatoes and toss briefly. Turn off the heat and keep tossing for another 30 seconds, using the residual heat to soften the tomatoes.

Taste and adjust seasoning with more fish sauce or sugar as needed.

Wanna save this recipe? Pin it!