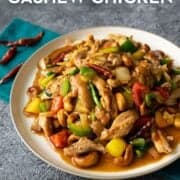 If you want to learn how to make the best possible cashew chicken stir fry at home, get ready. This is my "ultimate guide" to this popular takeout dish. I'm giving you all the tips and tricks that I know, (even some surprising ones), to maximize the flavour. It's also very quick to make; a perfect weeknight dinner. This is my husband's all-time-fave Thai dish, and he wanted to let you know that this version is awesome 😉.

What is Cashew Chicken? Is it Chinese or Thai?

Cashew chicken is simply a stir fry of chicken and cashews with a sauce that's got a salty-sweet flavour profile. Many people might think of cashew chicken as a Chinese dish, and indeed China is where this dish originated. You can tell by the presence of sesame oil, which we don't use very much of in Thai cooking.

But Thai cuisine is heavily influenced by Chinese food, and this is one dish that has become a mainstay in Thailand, and in Thai it's called gai pad med mamuang himmapan ไก่ผัดเม็ดมะม่วงหิมพานต์ . (I swear that whole thing just says "cashew chicken stir fry"!)

But as usual, no matter where dishes come from, once they arrive in Thailand, Thai people put our own spin on it. So the flavours are a little different in predictable ways; a little lighter, a little spicier, and with a little more fish sauce 😉.

Here are all the ingredients for Thai cashew chicken. It looks like a lot, but many of these you probably already have on hand. And if anything looks unfamiliar, not to worry - I'll explain everything you need to know!

How to Make Cashew Chicken

Here's a bird's eye view of the steps. But to ensure success I highly recommend watching the video tutorial before you start, as I often include extra tips; and for a very fast-cooking dish like this it's always good to see the whole process ahead of time, as you won't have time to read the recipe once the stove is on!

Pro Tips: Why This Recipe Works

How to Make Cashew Chicken Faster

If you love cashew chicken and, like my husband, want to eat it again and again but don't want to do all the prep every time, I got you. Here are a couple of ways you can prep ahead and save time when the urge for cashew chicken strikes:

It is better to use chicken breast or thighs?

I prefer chicken thighs in most dishes, cashew chicken included, because it's fattier, more flavourful, and much less likely to be overcooked and dry. If you prefer chicken breast though, not a problem, it works quite well here in this flavourful sauce. But if using breasts, add a little extra water to the marinade to give it a little extra juiciness - especially if you overcook them, which is easy to do with chicken breast.

What is Thai chili paste? Is there a substitute?

Thai chili paste is a sweet-savoury thick paste that is loaded with umami. It's made mainly from dried chilies, shallots, garlic and dried shrimp.

Some people do not add Thai chili paste to cashew chicken, but my strong preference is for versions with. It adds a rich, sweet-savoury flavour that makes it truly stand out. If you don't add it, it'll taste like a generic chicken stir fry - just with cashews. Nothing wrong with that, but to me a Thai cashew chicken really needs it.

If you can't find it in stores or online, you can make it at home using this recipe here. It's also really useful to have on hand for our famous tom yum goong soup as well!

You can also try adding Korean gochujang plus a teaspoon of extra sugar, but know that the flavours between Thai and Korean chili pastes are very different, so it won't taste the same. I think the Korean version will still be tasty regardless, so if you do try it let me know how it goes!

What kind of dried chilies do I need? Do I even need them?

The dried chilies are completely optional for this, as they serve more as a garnish than an integral part of the dish, and not everyone eats them. But they're an iconic "look" for Thai cashew chicken, so I have to include them here. You can also add dried chili flakes instead for some heat without having to deal with whole chilies.

If using whole chilies, they need to be fried so they become crispy and can be easily broken and incorporated into the stir fry for those who want to eat them. (See video for how I eat the chilis).

You can use any kind of dried chilies that are about medium spicy. So chile de arbol are great, or I've used generic ones you can find at Chinese stores. Avoid ones that are large though, as I find it harder to get them crispy without burning them.

Before you start, be sure to watch the video tutorial to ensure success! I always include little tips and tricks not mentioned in the blog post. The video is in the recipe card below, but you can also watch it on YouTube!

Watch my videos AD-FREE and get bonus content on Patreon!