This is an "insanely good" cake that I always loved growing up in Thailand. Crunchy, buttery, caramelly cashew crust on top of a moist, tender mocha cake. It's coffee, chocolate, butter and caramel all in one place...what could be better?? It's also very easy to make, so don't worry even if you're not an experienced baker!

Note: In the video I mentioned that the quarter sheet pan is about 12"x8", which is the dimension of the the bottom of the pan. The official dimension, measured at the rim which flares out slightly, is 9" by 13".

Want to Save This Recipe? Pin it!

Preheat the oven to 350°F/180°C, set the rack in the middle. Grease the sides of a quarter sheet pan with oil or butter, and line the bottom with parchment paper.

In a large mixing bowl, whisk together flour, salt, sugar, baking soda and baking powder until there are no more clumps.

In a small bowl, whisk together eggs, yogurt, and vanilla.

Pour the chocolate mixture into the flour mixture and stir with a wooden spoon or spatula until the flour is completely moistened. Add the egg mixture and whisk until smooth; it will be thick and hard to mix at forst, but it will slowly loosen. Once the batter is smooth, pour into the prepared pan and bake for 18-20 minutes or until a toothpick inserted into the middle comes out clean. Let cool while you make the topping.

For the topping:
Roughly chop the cashews until most of them have been cut at least in half. Then pick out the ones that are still whole or are very fat, and roughly chop them separately until you no longer have any whole or fat ones.

In a small pot set over medium  low heat, stir together evaporated milk and instant coffee until mostly dissolved. Add butter and let cook until the butter is melted, stirring occasionally.

While the butter is melting,  whisk together the sugar, flour, and salt in a small mixing bowl until well combined.

Once the butter completely melted, add the sugar-flour mixture, stirring constantly as you add. Keep stirring over medium heat, scraping the bottom, until it boils. Once boiled, turn off the heat and stir in cashews. Pour the topping over the cake and spread evenly to cover the entire cake.

Turn the oven broiler on "low" and set the rack so that the cake would be about 6" away from the element. Broil the cake until the topping has caramelized and browned (about 3-5 minutes). Tip: Most broilers have a hot spot which creates uneven browning, so once the toffee starts to brown, move the pan around to even out the browning as much as you can. Cool the cake completely in the pan before cutting

Once cooled, loosen the sides of the cake from the pan by running a thin knife or spatula all around the cake, being extra careful around corners. Place a cutting board on top of the cake and flip the cake upside down onto the cutting board. Lift the pan, and the cake should come out (you might need to push the bottom a bit to help it release).

To cut the cake, use a knife with a long blade to "mark" the pieces by cutting just through the cake and stopping when the blade reaches the cashews. Then using a sharp chef’s knife, go into the same cuts and cut through the cashews with one firm press. Note: You can also just cut the cake all the way through in one go using a sharp chef's knife. I just find that I get straighter cuts if I first mark the cake using a knife that is long enough to cut across the cake in one go!

This cake keeps for several days in the fridge. It also freezes very well. To reheat a frozen cake, let it thaw at room temperature for at least 15 minutes, then heat the cake in the microwave in 10-15 second increments.

I use Nescafe instant coffee, which is the most popular brand in Thailand. However, you can also use 1 oz (30 ml) of strong brewed espresso to replace the coffee AND the water. You can also use Starbucks VIA packets, although I have never tried it so I'm not sure how many packets you'd need (but I'm gonna guess 2). 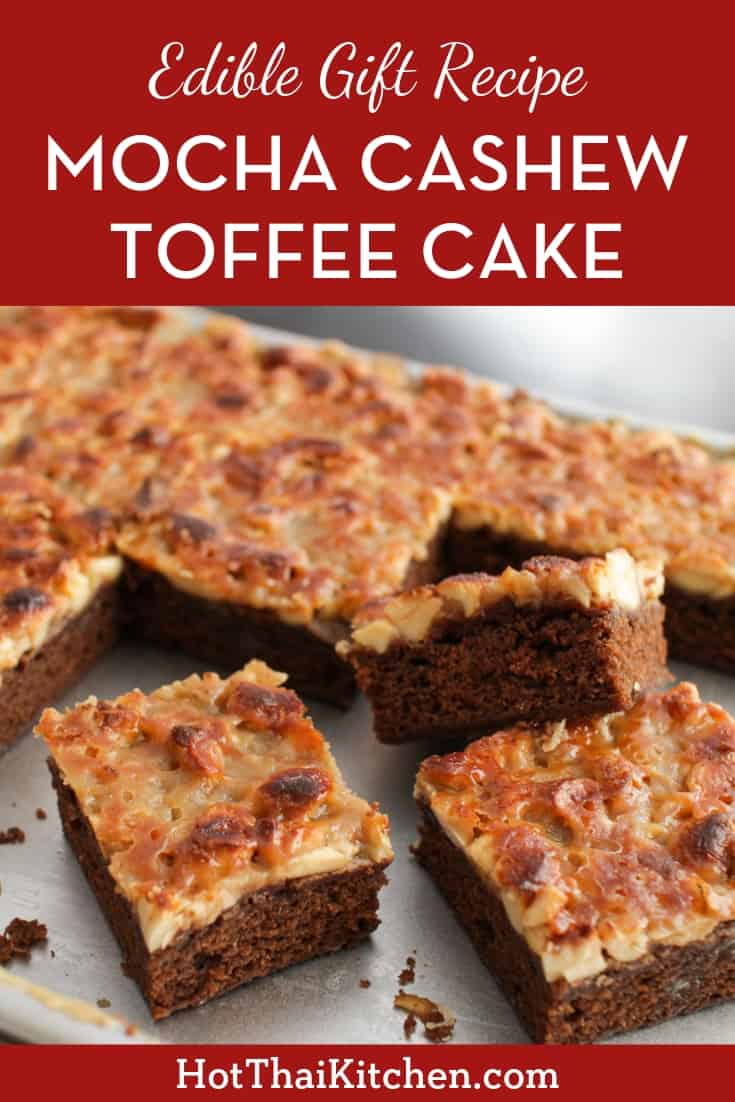