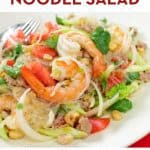 Glass noodle salad is a staple dish in any Thai home, so it was one of the first things I made when I left Thailand and was homesick! Glass noodle salad has wonderfully bright flavours with lots of refreshing crunchy vegetables. I guarantee it will become a favourite salad!

Many people don't know that glass noodles are actually made from mung bean starch. In Thailand they are considered to be good for those trying to lose weight. Not because they're particularly healthy (it's still just all carbs!) but because glass noodles absorb a lot of water, so you only need a little bit of noodles to fill a bowl. So at the end of the day they are lower calories per serving!

Kitchen Tools & Ingredients I Use