Have you ever been intimidated by the soy sauce aisle at the Asian grocery store? In my experience, it is the single biggest section dedicated to one type of product at most Asian supermarkets. At my local store it's half of the entire aisle, and I've seen so many people stand in front of the aisle and looking entirely overwhelmed. Well, this video is here to help you clarify some of those questions.

*Extra Goodies for Patreon Members: In this episode's "Show After The Show" I share a few "unconventional ways" I use soy sauce (that is, outside of putting it in Asian stir-fries and the other usual suspects), and my cameraman Adam also shares his favourite soy sauce and why! Find out more about becoming a Patreon member here.

They're those bottles that just say “soy sauce” on it, or maybe "premium soy sauce" if they want to sell it for more money! The main purpose of regular soy sauce is saltiness, obviously right? But you’ll see why it’s important to point out when we talk about the other types.

This is what you’ll use if your main goal is to give your dish a dark rich brown colour. A little bit of this stuff goes a long way so you never need much, and if you put too much it tends to taste a bit bitter. In Thailand our version of dark soy is actually called black soy sauce, it’s how I refer to it in my recipes. Thai dark soy sauce is not very salty at all so you don’t add this if you want to add saltiness.

Thai black soy sauce can be hard to find, but Chinese dark soy sauce this is much more available. However, it is a lot saltier than the Thai one, so while it does work as a substitute, be sure to cut down on the amount of regular soy sauce or other salty ingredients in the recipe slightly.

We rarely use sweet soy sauce in Thai cooking, but it is widely available in Thailand as people use it to make some dipping sauces. But most of the time you’ll see it in Indonesian and Malaysian cooking. This is used when the main goal is to get sweetness, with a touch of saltiness, and a rich flavour. It’s sort of like a combination of molasses and soy sauce.

Many people think this is "low-sodium" but it isn't. From what I've seen, if a brand has light soy sauce, it won’t also have “regular soy sauce” because the light IS the regular. It seems like some brands label it “light” because they also carry a “dark soy sauce” and they want to clearly differentiate the two. Some brands, as you see in the video, will have a light AND a low-sodium as well, so it can be confusing!

Golden Mountain Sauce, Thai Seasoning Sauce, Maggi, Bragg's Liquid Amino (or liquid soy seasoning)...these are basically a type of soy sauce in a sense that they are all fermented, salty soy products. They just don't call them soy sauce because the flavours are different. In the case of Bragg's is also gluten free and can be used as a gluten-free soy sauce.

A better option for gluten free soy sauce substitute is perhaps tamari. Tamari is a type of Japanese soy sauce that is made with little or no wheat, but most brands on the market in N. America make it with no wheat so it’s appropriate for people who don’t eat gluten.

Want to save this post for later? Pin it! 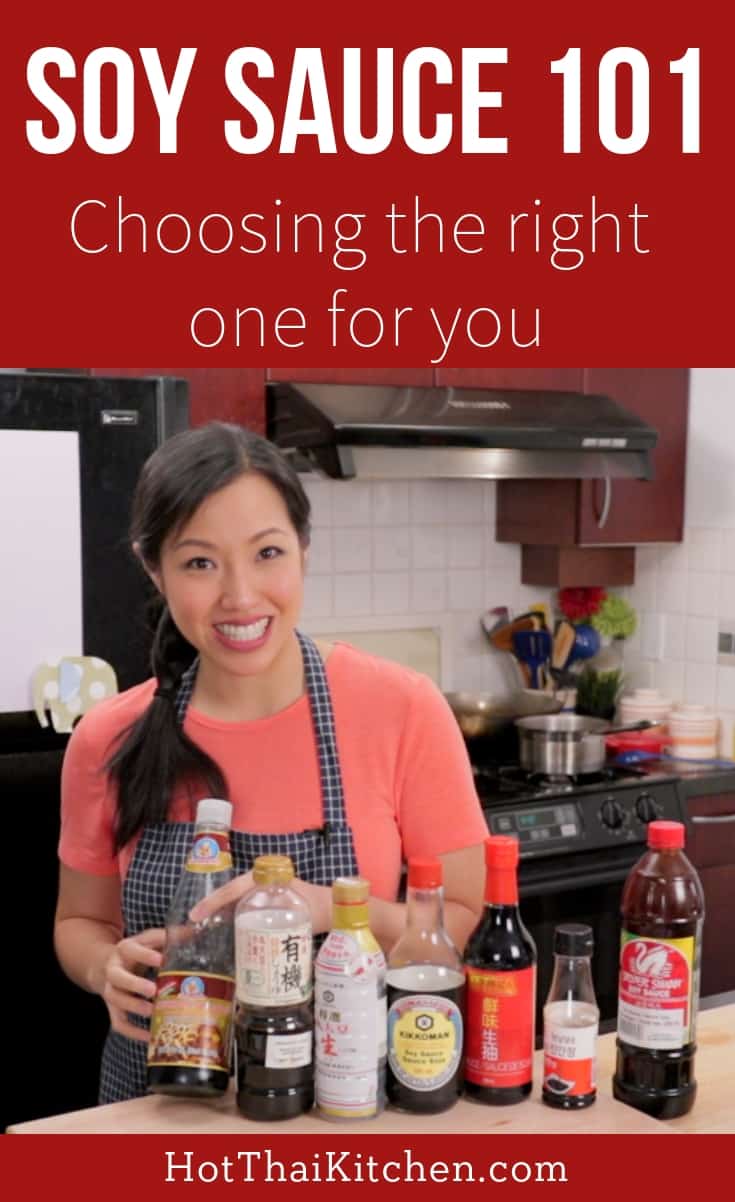 NEVER MISS A RECIPE! Sign up for my monthly newsletter to stay up-to-date on all recipes and news!
Holler Box