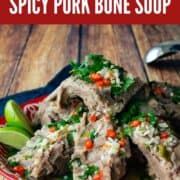 A few years ago, Mark Wiens posted a video titled "The Most INSANE Street Food in Thailand". Where he was eating a mountain of tender-braised pork bones "soup," with the bones piled higher than his head, surrounded by a delicious spicy broth laced with chilies and cilantro.

That video has now been viewed over 7 million times, and of course I've received MANY requests for the recipe! The good news is that it's actually easy to make at home and IS as tasty as Mark says it is. You'll also end up with extra broth that's perfect for more street foods such as spicy Tom Yum Noodles!

A dish made from just...bones?

If you think it's crazy that we should be eating a dish made from bones, hear me out. This dish is made from pork neck/back bones, which are most commonly used for making Thai noodle soup broths. But they have a lot of meat on them tucked away in all the nooks and crannies as well.

In fact, every time I make pork stock with these, once it's done simmering I remove all of the tender meat that is practically falling off the bones, and I always end up with enough meat for a full meal for two adults!

So you can think of this like eating ribs. There are a lot of bones, but also a lot of meat. If you eat chicken feet, this has way more meat than that. I'm pretty sure this dish was created because some noodle soup vendor thought there's enough meat in these bones to be a whole nother dish!

What does "leng saeb" mean?

Leng is short for ia leng which means pork spine in Teochew Chinese. They're the bones most commonly used to make pork stock for noodle soups because they have a lot of cut surfaces exposing the interior of the bones, cartilage and marrow which give the broth rich flavour and body.

Noodle soups were originally introduced to Thailand by Teochew immigrants, which is why Thai people have adopted the Teochew term. (Many Thai people are of Teochew descent, myself partially included.) Fun fact: Leng actually means dragon, and when the spine bone is removed from the pig, it is long like a dragon!

Saeb on the other hand, means delicious in Lao. But when Thai people use it, it's used to mean "spicy and delicious." This is because Lao food is generally more spicy than Thai food.

You can find leng bones at most Chinese butchers or grocery stores sold as either pork neck bones or pork back bones. In my experience pork neck bones are meatier, so that's what I use. But if you can only find back bones that works as well. They will not be cut into the foot-long pieces you see in Mark's video above, but that's actually good because it makes them a lot more manageable!

As you might suspect, you can absolutely make this dish using pork ribs. Baby back ribs or spareribs will work just as well, and you can separate the bones into smaller chunks so they will fit into your stock pot. It will actually be a little easier to eat, but the resulting stock might not be as rich because ribs have fewer exposed bone surfaces, which are what gives body and flavour to the stock.

Alternatively, you can use chopped spare ribs that are often sold in small pieces at Chinese butchers - and as I used in this dim sum spare ribs recipe. This will be a better option than full pork ribs because there are many more exposed bones and a lot more cartilage (also great for a full-bodied stock) and it'll be much easier to eat. You'll be missing is the impressive "mountain" experience, but it'll taste just as good.

There are 2 steps to making leng saeb; the first is braising the pork bones and making the base stock, and the second is turning that stock into the saeb broth.

Here's the bird's eye view of the process, but be sure to check out the full video tutorial in the recipe card below to ensure success!

Since you'll be eating meat off the bones, be sure to cook it long enough that the thickest part of the meat is super fork tender and comes off the bones easily. Your total cooking time should be at least 2 hours, and may even be 2.5 hours for particularly meaty bones.

I don't eat pork, can I substitute another meaty bones?

Absolutely! You can make this recipe with chicken feet if you like them, or wings. For beef you can use oxtail. Chicken will take 30-45 minutes to become tender, oxtail can take up to 3.5 hours. Or try this Thai oxtail soup recipe that has a similar vibe.

I cannot find pork back or neck bones, what can I use instead?

You can make this dish using pork ribs. Baby back ribs or spareribs will work just as well. You can separate the bones into smaller chunks so they will fit in the pot. It will actually be a little easier to eat, but the resulting stock might not be as tasty because ribs have fewer exposed bone surfaces, which is what gives body to the stock.
Alternatively, you can use chopped spare ribs that are often sold in small pieces at Chinese butchers, like the ones used for this dim sum spare ribs recipe. This will yield a better stock because there are many more exposed bones and a lot of cartilage. It'll also be much easier to eat, but the presentation will not be as extravagant as you won't have the mountain!

Can I make this dish less spicy?

Yes, but since chilies add a nice flavour to the broth, I suggest removing the seeds and pith from the chilies rather than using fewer chilies.

Here are two recipes that have a similar meat-on-bone-in-spicy broth vibe. The fish has practically the same broth as this recipe, but the oxtail has more of a tom yum feel with lemongrass, galangal and lime leaves.

Before you start, be sure to watch the video tutorial to ensure success! I always include little tips and tricks not mentioned in the blog post. The video is in the recipe card below, but you can also watch it on YouTube. 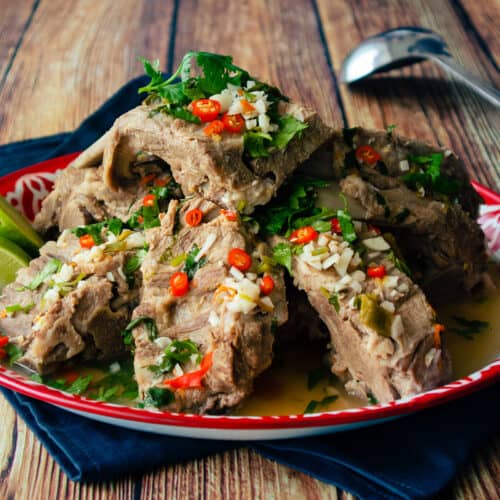 For the pork stock:

For the Leng Saeb Broth

To make the pork stock

To make the Saeb broth