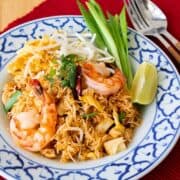 Just when you thought pad thai couldn't get any better, I hit you with a crispy version! Okay, this dish isn't actually known as crispy pad thai. It's called mee krob song kreung which can be translated to "crispy noodles deluxe." But that doesn't really tell you much about what's going on here, and the ingredients (tamarind, beansprouts, garlic chives, tofu, etc..) and the flavour balance (sweet, salty, sour) are very similar to pad thai - so I prefer "crispy pad thai" as it is a much more informative name.

This recipe is part 2 of my mee krob series. In the first post I shared how to make the sweet and sour crispy noodles and have it on its own as a savoury snack. And in this post I share how to turn those noodles into a luxurious meal in minutes. So you will need to check out part 1 first for the complete recipe.

The "mother recipe" for this dish is mee krob or sweet and sour crispy noodle treats which can be eaten as snacks on their own, and are very addictive. But this dish is a great way to dress up the mee krob and turn them into a meal.

To be honest I think once you start snacking on mee krob, you'll probably eat it all in a very short time, so if you want to make crispy pad thai I suggest setting some aside in advance. Not to mention it's easier to make it from noodles that have not been compacted into blocks.

Here are all the ingredients you'll need to make mee krob song kreuang. Very similar to pad thai, right? The only two differences here are the noodles and using cashews instead of peanuts.

NO AMOUNTS NEEDED. Yes, isn't that great? I've provided ingredient amounts in the recipe but you don't really need them, except for the fish sauce amount for the egg ribbons (which I forgot to include in the photo!). Since the noodles are already perfectly seasoned, everything else here are just add-ins, and you can add as much or as little of each ingredient as you want.

If you like a lot of noodles and only a little bit of other stuff, great. You want a lot of bean sprouts and tofu for something healthier? That works too. Having said that, you might find it helpful to watch the video below for a visual guide of approximately how much to add.

PRESSED TOFU. This is the firmest type of tofu available, and it's sometimes sold under the name "bean curd." There are generally 2 types, "plain" and "marinated" (the marinated is sometimes called "savoury"). Either will work, but here I am using marinated which is brown on the outside. It doesn't have a strong flavour, so you don't need to change anything in the recipe if you use the plain type. You can find these at Asian grocery stores where all the other tofus are.

GARLIC CHIVES. If you don't have garlic chives you can use green onions instead, but if you do I would chop them small as they are stronger tasting than garlic chives.

SHRIMP. Shrimp are the most classic protein, but you can also substitute chicken instead, or omit and add more tofu. If using chicken, I would marinate it with a little bit of soy sauce or fish sauce so that it will have some flavour in itself. The recipe card below will have more details on this.

Here's a bird's eye view of the process, but as I mentioned, this post doesn't include how to make the noodles themselves, so if you haven't seen that, check out the Sweet and Sour Crispy Noodles Recipe first. I also recommend you check out the full crispy pad thai video tutorial in the recipe card below to ensure success. 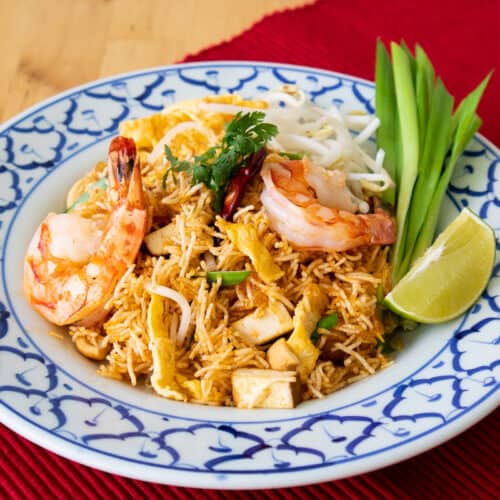 By: Pailin Chongchitnant
It has the sweet and sour flavours and all the classic ingredients of pad thai, but the noodles are crispy! It's an explosion of flavour and texture. This recipe doesn't include how to make the noodles themselves, so if you haven't seen it yet, check out the crispy noodle recipe first! Gluten free.
5 from 1 vote
Print Recipe Pin Recipe Share
Prep Time 20 mins
Cook Time 15 mins
Course Main Course
Cuisine Thai
Servings 6 servings