This recipe was originally made for my sister site for non-Thai food PaisKitchen.com, but since in Thailand we also very commonly eat Chinese BBQ pork, and use it in a lot of dishes, I thought it would be appropriate to put it here as well!

Chinese BBQ pork is loved the world over, and it’s not hard to make at home! With some key ingredients and a couple of technique, it might even be better than buying, actually, it probably will be 🙂 Once done, you can slice and have it wit rice, noodles, use it in a sandwich or a steamed bun. Or just have it straight up!

This is perhaps the most important step. Classically, Chinese BBQ pork uses pork butt, a.k.a. pork shoulder for this dish. It is a flavourful and fatty cut of meat that is perfect for this dry roasting application. I go to the butcher and ask for a pork shoulder roast, something that is at least 5 inches long so you have a nice long-ish piece at the end. It’ll be at least 4 lb, more than what you need for this recipe, but you can double the recipe or save the rest for pulled pork or a beautiful pork stew. Oh, and make sure you get boneless roast so you don’t have to debone it!

The only thing about pork butt is that it is a highly irregular piece of meat. The whole roast is made up of various different muscles that look (and taste) slightly different, which I think keeps it interesting and when you eat char siu. This is also why some pieces don’t taste the same as others. It’s also got lots of fat and some connective tissue running throughout the piece, so it can be a bit intimidating to breakdown for some. But don’t worry, you’re just literally cutting it down into log shaped pieces, cut right through any irregularities, you’ll be fine. Chinese BBQ pork is supposed to be rustic and irregular looking anyway!

How About Something Leaner?

Because of this, some people like to use easier more “manageable cut” for Chinese BBQ pork like pork loin or pork tenderloin. Is that okay to do? Sure, you’re the chef! But please remember that pork loin and tenderloin are extremely lean, and so if you overcook them they become dry very easily. So I would suggest using a meat thermometer, even better, get a leave-in probe thermometer like this one  so you are guaranteed to have perfectly cooked pork. For well done pork (typically how char siu is made) you want to get the pork to 155°F and then let it rest, loosely covered in foil for another 10-15 minutes which should bring the pork to just about 165°F which is well done.

Pork loin and tenderloin are also not as naturally flavourful, but if you’re going to end up using the pork in another dish where you will drench it in sauce, it will be fine. But if you want to eat it simply sliced with rice or noodles, you might want to stick with pork butt.

The glaze is what makes this pork shine and glisten and gives it a sweet caramelized crust. I like to just use some honey mixed with a bit of the red bean curd juice, but for an extra oomph of flavour you can also take some of the leftover marinade, heat it up to boiling to cook off raw pork juice, and then combine that with the honey to make a glaze. It’ll be less red that way, but it’ll give you more of the flavours of the spices, either one works well.

Shop Ingredients and Tools I use 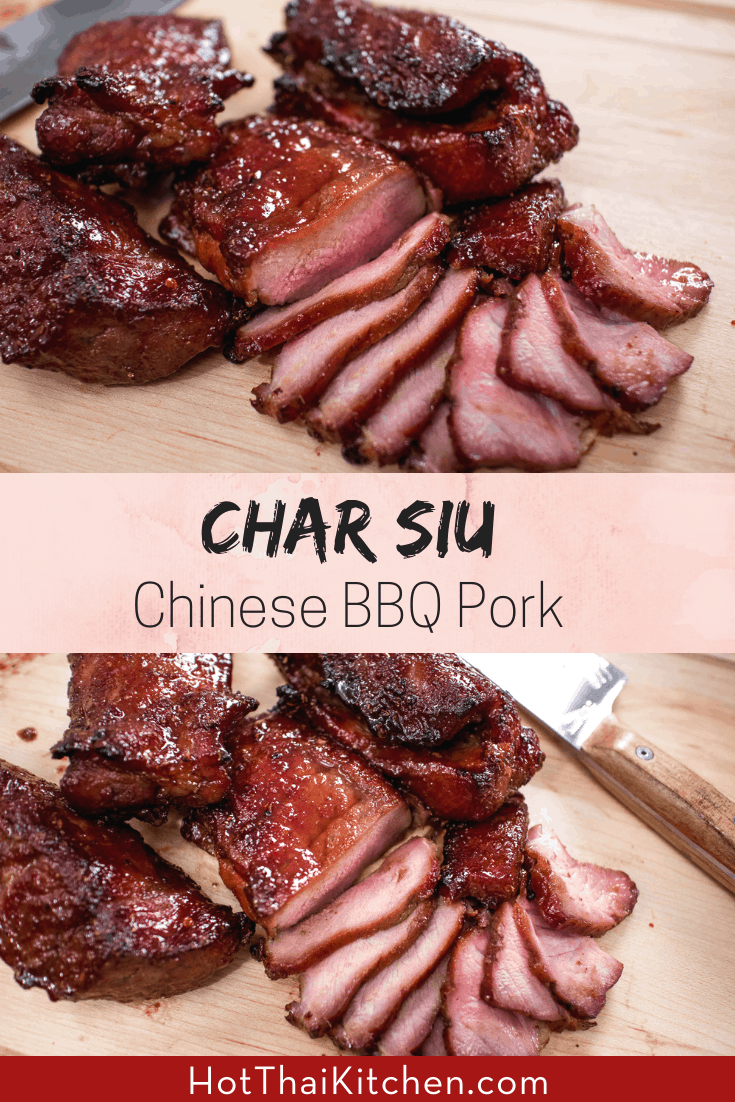